Learn to Shag with Don Bunn

“I love the SHAG and the people that are involved in shagging. It has been an important part of my life. It was a great honor for me to be elected into The Shaggers Hall Of Fame”, said Don. 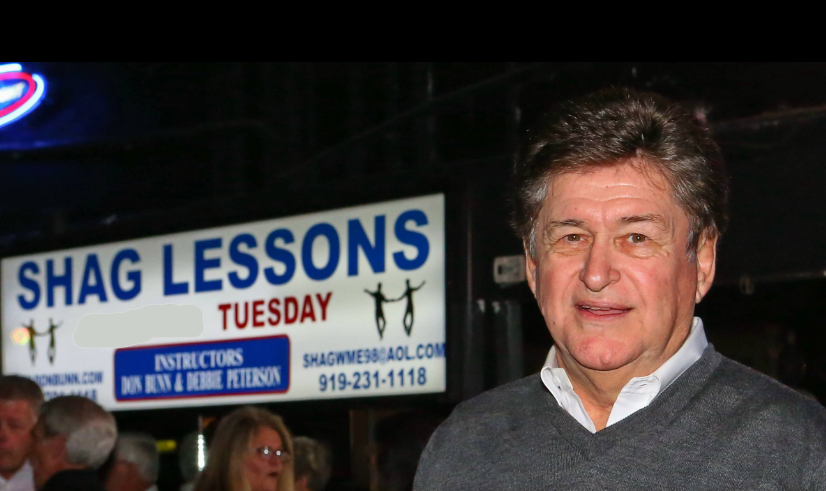 Don was born in Goldsboro, NC and lived in Rosewood (just outside Goldsboro) where he went to school through his sophomore year of high school. During the summer following his sophomore year, Don played in a summer basketball league composed mainly of past and present players from Goldsboro. During that summer the Goldsboro High School basketball coach convinced Don to transfer to Goldsboro High where he finished his Junior and Senior school years. After high school he left for East Carolina University.

Dancing has always been fun to Don! At a very early age he was a dance partner for a couple of his cousins. Their help and some ballroom instruction comprised his total education in dancing until after he began driving. Don’s high school and college shagging style (or bopping/fast dancing as it was often referred to then) was very basic. He was able to dance just enough to get by at the Seymour Johnson Air Force Base teen club, the Goldsboro Episcopal Church after high school sporting events, the Wayne County Recreation Center, Faison NC, Atlantic Beach NC, and other similar places where he would go to dance.

After finishing ECU, married life and children took Don away from the active shagging life. During the next few years he lived in several NC locations: Fayetteville, Rocky Mount, Wilson and New Bern, as well as Hampton, VA. His two children, Angela and David were the center of his attention during those days.

Don left New Bern in 1978 and moved to Greenville, NC. In the condominium complex where he was living Don met and became good friends with Charlie Womble. Although Charlie was already a very good dancer, this was prior to his real shagging days. But the shagging bug bit Charlie and, once that happened, Charlie was very persistent in getting Don involved in the dance. Because of the coaxing and coaching of Charlie, Don found himself trying to learn more about the skills involved in shagging and the history of shagging. Judy Bazemore (Eastwood) was also very instrumental in Don’s development as a shagger at this point, giving him pointers and holding his hand while he stumbled around on the dance floor learning to shag.

Don entered his first shag contest in 1980 at Gary’s in Rocky Mount. It would be the very next year before he started competing consistently, which he continued to do for many years. Don is very quick to thank his talented dance partners who competed with him for his success. During the first few months of competition Don moved from the Novice to the Pro Division. He won numerous contests and one year, with two different partners, claimed two of the top five places for SPA Shag couples. He had finished 3rd with one partner and 5th with another. Don’s top placement in the National Shag Dance Championship came when he finished in second place in 1990 behind his mentors, Charlie Womble and Jackie McGee. Proving this was no fluke, Don followed up with a third place finish the next year. More important than the success in the contests, Don says, is the many lasting friendships he has made while competing!

Currently, TJ’s Night Life (4801 Leigh Dr., Raleigh, NC 27616) is the location for group shag lessons with Don. On Mondays and Tuesday, Don teaches with Debbie Peterson. Don is also available for special classes and workshops at TJ’s or at your location and for private shag lessons in his personal dance studio in Raleigh.

Don got started as a shag instructor in 1981, in Greenville NC when Charlie Womble asked Don to take his place as the local shag instructor. Don’s first instructor partner was Judy Bazemore (Eastwood). For the most part he has been involved in teaching shag lessons ever since. In 1985, Don moved to Fayetteville NC and soon started teaching shag lessons there with Beverly Lewis. Don also got very involved with the Fayetteville Area Shag Association (FASA) and served as the president of that club in 1988. He was honored by being inducted into the Fayetteville Area Shaggers Hall Of Fame in its inaugural year, 1992

In the early 1990’s a company transfer moved Don to Raleigh NC. Not long after, he began teaching shag lessons at Reds Beach Music on Craftsman Drive. Don taught at Reds until the club closed in June 2006. Then he rented some temporary space at Fred Astaire Dance Studio for a period of 9 months prior to moving to TJ’s Night Life.

Don and Debbie Peterson are invited annually as the shag instructors on the Fun Blues Cruise aboard Carnival Cruise lines. They have been the instructors for the Southern New England Shag Explosion in Boston, Mass. In addition Don has conducted shag classes at the Raleigh Country Club, the North Ridge Country Club and at the Fayetteville Country Club. Shag lessons are always a big hit at Fraternity Social Mixers. Don has provided both instruction and entertainment for several N C State fraternities on such occasions. In the past, Don has provided one-night workshops and weekly group lessons for several Raleigh Churches. Corporate outings, where the desire is to have group participation among the attendees, is a great venue for shag lessons. Sprint, Bell South, Remax Realty and 1st Choice Mortgage Equity Corp are a few of the companies that have enjoyed successful company functions with a great deal of excitement added through shag lessons and shag demonstrations. If you have an occasion where you think shag lessons might fit, contact Don and discuss it.

Don said, “I get a great sense of satisfaction seeing someone I have taught get heavily involved in shagging, either through shag club support and participation, shag competition or just social dancing.”

Providing Shag instruction now occupies most of Don’s shagging time. Additionally Don enjoys being a very active member of the Raleigh Shag Club. He served as the president of the club in 2005. Don frequently travels to shag activities throughout the south east including the Grand National Dance Championship in Atlanta, the National Shag Dance Championship in Myrtle Beach and the SOS Migrations in North Myrtle Beach. Don is often asked to judge at various Shag Contests.

DON GIVES THANKS AND CREDITS FOR HIS SUCCESS

Don credits many people with his success as a shag dancer and shag instructor but he is always quickest to praise four individuals, Charlie Womble, Jackie McGee, Judy Bazemore Eastwood, and Mike Pace for the encouragement and help they gave him during his early shagging days. Don believes it would be impossible to mention everyone who has helped him because he was never bashful about asking for help. He does particularly remember help on the basics and the philosophy of the dance from others such as Shag Alberty, John Teel, Norfleet Jones, Charles Gurley, Charles Calcutt, Doug Perry, Bill Young and Eddie Monsour. Don also recalls one night at Peaches Night Club in Greenville when Judy Bazemore introduced him to Harry Driver and Harry spent several minutes trying to teach Don to do a Shag Pivot. Don says, “I never did learn the pivot that night and I was later amazed to find out that I had had the benefit of a Shagging Icon, Harry Driver, working with me”. All of these people, great dancers with their own unique styles, taught Don more than how to do a shag step. They taught him to appreciate the history of the dance and the smooth, fluid look of a dancer who dances with feeling for the music.